Max Snitser wrote this on Feb 19

After 2 months that we spent in Bali, we decided to go to Cambodia to visit the famous Angkor Wat and explore the coastal area of Cambodia.

We've heard and seen cool pictures of untouched white sand beaches of Cambodian islands, and everybody knows the Tomb Rider game and movie which is related to Angkor ancient city. So right after the Bali, we went to Cambodia excited about new adventures.

There was no direct flight. So we had a layover in Kuala Lumpur at night, but anyway, everything went smoothly, and the next day we arrived in Siem Reap. We booked a hotel not far away from the city center, and there was free airport transfer included. The funny thing that there aren't much taxi cars in Siem Reap and most of the time it's a tuk-tuk instead a car.

Everything looked really simple if compare it to other places in Asia we've visited. The road is less smooth, lots of free space. So you at first you can have a feeling that you're in the middle of nowhere, but later on when we approached the city it started to be more interesting.

Everything in Siem Reap is about Angkor Wat. You can see signs everywhere. They have shops, cafes, restaurants, casinos. Every place is somehow related to Angkor Wat.

That's probably the hottest point for tourists in Cambodia, but actually, we also stayed in Siem Reap with the same reason as most of the people who travel to Cambodia. 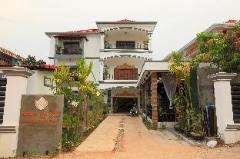 We stayed at Sakun Angkor Boutique. It's a nice hotel, close to the city center. Convenient location, simple breakfast was included. Good for a couple of days.

After we've checked in our hotel, we decided to take a quick nap after our night in KL airport, and the evening we went to explore places nearby and grab some lunch.

One really good place to have some healthy food is ARTillery Cafe. We really liked it there. So definitely check this one out for healthy smoothies and vegan options if you'll be in Siem Reap.

Next day we ordered a couple of bicycles at the reception of our hotel to go to Angkor Wat.

The thing with the ancient city is that you need to have some kind of transport to explore it. There are several ways. One of them is to rent out bicycles; another one is to hire a tuk-tuk driver.

Of course, tuk-tuk is the most popular way, and probably it's faster than bicycles. But we like the freedom of travel on our own. So bikes worked out for us much better, and it's also a great way to burn some calories.

The woman on reception warned us to leave bicycles on parking lots to avoid them be stollen and that we need to buy tickets ahead of time in the ticket office that's located on the road to Angkor Wat. So it's not like you go there and pay at the entrance. Tickets should be bought ahead of time. I'll explain why.

The thing with Angkor Wat is that it's just one temple complex and actually you can explore the whole ancient city. It's named Angkor, and it was a capital of the Khmer Empire in 9th to 15th centuries. There are a lot of Hindu temples and ruins that remained.

This city is gigantic. The Angkor complex stretches over 400 square kilometers, but the touristic part and the most interesting places to see are concentrated in a much smaller area.

Temples we have visited

We went there for a day and couldn't see each temple, but we saw the most interesting of them. You'll find a map below with the temples that are the most recommended to visit.

The biggest and the most popular temple complex in Angkor. You can find there the biggest crowd of tourists than in any other place in the ancient city. It's beautiful on sunset, but each year more and more people attending it. So it's hard to make a clean photo of it.

Pyramid-style temple, with steep stairs to a panoramic terrace.

Historic ruins of a temple built by a king, with ornate stone carvings and shade trees. One of our favorite temple and the last one we visited. There is a fantastic view of a lake.

We spent the whole day exploring the ancient city. General thoughts are that it's a truly unique experience. We've never seen anything like this before. Lots of things are ruined too much and some of the places already closed for tourists. Some things are on reconstruction, but probably it will never be the same as it was built initially. So we're glad that we could visit it in its state until it's completely closed or reconstructed.

When you are walking around inside, touching these walls and ruins, see the nature, butterflies, and sounds of birds it feels so surreal.

The next day we spent in Siem Reap. We needed to buy bus tickets to the coastal area of Cambodia, specifically to Sihanoukville. We decided to go by bus because it's 3 times cheaper than a domestic flight and we've heard that Cambodia has pretty good bus companies with buses in good condition. However, not all of them are that good.

I think we've almost been scammed by our receptionist and I figured out that this is a common behavior of pretty much every hotel or hostel in Siem Reap. They all trying to sell tickets to foreigners of Virak Buntham bus company that has a really bad reputation on the Internet. I've read a lot of greasy reviews about not working air conditioning or cockroaches inside and that buses itself are very old and not that comfortable for long rides like that.

Why do I think that we almost got scammed? Because that woman on reception started promoting this bad company right after we asked here about possible ways to go to Sihanoukville. And even after that we've read reviews on this company and told her that it has a bad reputation she insisted on buying from her and that there are no other options and tickets of other bus companies are sold.

I spent some time on research and reading dozens of reviews about Cambodian bus companies. We decided to use the Giant bus company and their night bus that goes straight to Sihanoukville without stops. So we just went straight to their office and bought tickets from there on the evening the same day.

We've checked out from our hotel and spent the rest of the day in a cozy cafe that called New Leaf Eatery.

They have a good cappuccino, smoothies and good food selection.

That's how we spent our 3 days in Siem Reap and visited Angkor Ancient City. Next part of adventures in Cambodia will be continued in the coming post. I'll share my experience of visiting the wildest island that we saw in Asia and contrasts of the life in the coastal area of Cambodia.

Get An Email When A New Post Comes Out

It's easy to get lost in social media nowadays. So if you like the stuff that we write on the website then leave your email to get the notification right into your inbox.

No spam. Ever. Promise!